Living the "Posh Life" in Prague

I arrived in Prague after a 4 hour train ride during which I almost melted because the lady in my train car didn’t want the window open (should have moved).

The flat I stayed in was owned by a woman named Veronika, and she was incredible nice and helpful. Her building was built in 1900 and in the nicest apartment neighborhood in Prague. Another girl stayed there, but I only saw her once.

After getting dinner and having a drink at a cute little whiskey bar down the street from the flat, I returned to see Veronika working on her computer. She said it was much too hot to be inside, and invited me for a beer at the park next to her flat. These were the beers:

This was the view:

Yes, that’s the entire city of Prague, all the way to the castle and cathedral across the river. Stunning.

After finishing our beers, we stopped into the bar in the basement of our building, and watched some of the odd locals while we continued getting to know each other. Veronika is a graphic designer and artist, and she’s been in a distance relationship for two years.

The next morning, we went to the farmer’s market in the church square in the neighborhood. We then got coffee at Mama Coffee and ate breakfast at a little bakery and bistro – I wish I could transport it back to the State with me.

Veronika decided to go visit a river in the countryside due to the heat in the city, and I put on a pair of walking sandals she had lent me to head for the city center. The National Museum was closed for renovation and repairs, but that didn’t stop anyone from taking pictures of the exterior.

The statue is considered the beginning of the city center, and also the beginning of Wenceslas Square. I followed the crowds further into the city, knowing I would eventually see the river and cross St. Charles bridge, another popular tourist spot. While walking through the old city and taking pictures of the architecture, I came to a wide open square filled with tourists taking pictures of and receiving lectures about an incredibly ornate clock on the side of a church. 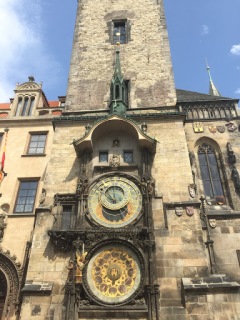 The clock has a rather interesting history – it doesn’t actually tell time.
“The Story of the Clockmaker”
Several hundred years ago, a ruler in Prague commissioned a famous clock maker to create an astronomical clock on the side of this church. When it was complete, no other clock in the world matched its beauty and abilities (time, planetary movements, etc.). The ruler, fearful that the clock maker would duplicate this work for another monarch, blinded the clock maker out of jealousy to protect the majestic work of art.
The poor clock maker, now blind, wandered the streets of Prague until he came upon his beautiful clock. In sadness and rage, he attempted to destroy it to spite the ruler for his cruelty. He was only partially successful. The part of the clock he successfully damage was the part that told time. The rest of the astronomical elements remained in tact.
However, it is said that the clock maker cursed the clock when he attempted to destroy it. And there seems to be some truth to the story, because to this day, no one has ever been able to repair the clock to make it tell time correctly.
Of course, there are more details to the story like names, etc. but I was more interested in the overarching, haunting, magnificent elements of the clock and its story.
I wandered a bit more through the city, taking everything in, and then came upon the river and crossed St. Charles bridge. There were tourists almost everywhere.

I decided that my next mission would be to find the Prague Castle I had seen the night before. And oh my goodness it was hot. Phew.
Luckily, the view from the palace complex was breathtaking. You can see the entire city of Prague from multiple spots along the outside of the complex. And, of course, there’s a Starbucks. 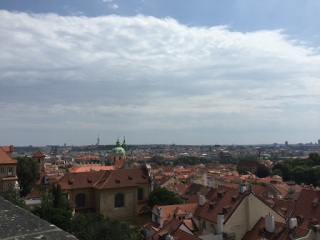 I had to. It was HOT.
I didn’t feel the need to pay for tickets to see the interiors of the buildings, and I also realized it was early afternoon and I needed to get back across the river to a cafe Veronika had suggested for lunch.
The cathedral was incredibly beautiful, and I met a few other ladies from the U.S. on a trip together from California. We took some photos for each other, and then went on our way. 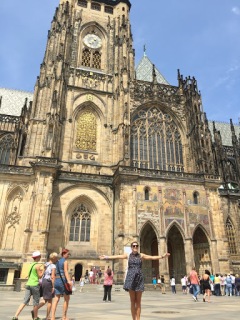 I stopped at a French market on my way back across the bridge and sampled some wine. It was so busy! The food looked super tasty, but I was saving room for my lunch at Cafe Louvre. 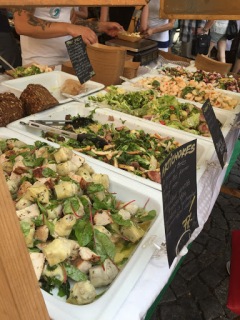 Cafe Louvre was great, and I saw some protesters marching down the street in the middle of my lunch (at 3pm – I lost track of time and wasn’t really hungry because it was too hot to be hungry).
After stopping by the political rally/protest at Wenceslas Square, I went back to the flat to rest and shower before going out for the evening. I had walked around 10 miles at that point!
A friend of mine from several years ago, Roman, lives in Prague and offered to show me around the city that night. We met at the statue, and went to dinner at CafeCafe (redundant, but great food and drinks). The schnitzel was great, and so was the apple cocktail we ordered. 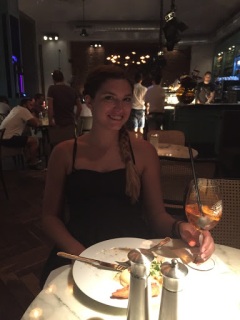 After dinner, we went to a bar called Hemingway’s (like the author), and I tried absinthe for the first time. It’s not nearly as crazy as everyone makes it out to be. Not something I need to do every Thursday, but a fine experience for my last night in Prague. They serve it with a spigot like this: 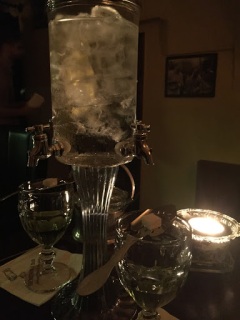 It also comes with sugar cubes, and spade-like objects with slots. The idea is not to drink it straight, but to put a sugar cube on the spade, drip some water onto the cube, and then take the first drink. You then tip the rest of the cube into the drink, and the absinthe usually turns a bit of a milky color. I should point out that I did not have French absinthe, which is the kind with the hallucinogens. What we drank was Czech, and much like drinking clear, minty bourbon.
We left Hemingway’s and went to a Cuban/Latin bar called La Bodeguita (?), where people were salsa dancing between the tables! There were photos lining the walls of famous people who had been to the bar, and signatures all over the walls from former patrons. Of course, Roman asked the waitress for a marker and we signed the wall! 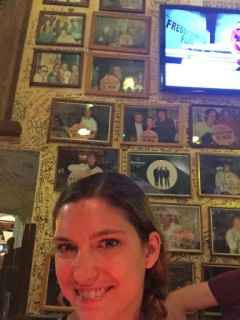 I even added my hashtag!
We met a couple of guys from Sweden, but parted ways when we decided to go to a place called James Dean.
Prague at night is BEAUTIFUL.

I also have a HUGE crush on James Dean. Always have. 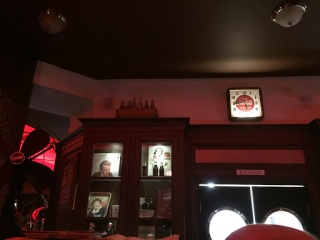 It was like an old school diner, with a dance floor downstairs. We had a blast dancing, and then went home for the night.
Pro tip: I’m not sure there’s such a thing as “last call” in Europe. Apparently, bars don’t close until around 4am or the dawn hour.
The last two things I saw in Prague were exactly what was left on my list, the “Dancing House” or “Fred and Ginger” 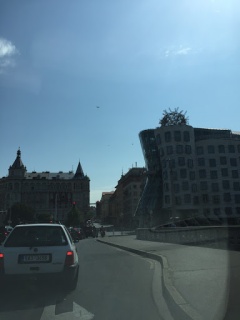 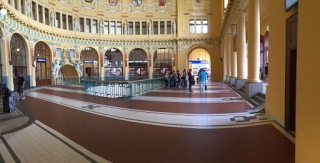 Overall, Prague was probably one of the best weekends of my life. I’m not sure how I will top the experiences there throughout the rest of my trip, but if the next several stops are half of that fun, I will be one of the luckiest people in the world.
Special thanks to Veronika and Roman for making my weekend so special! ❤