This will be short because it’s 1am here in Prague, but I want to write about the lovely evening I just had.

I am staying via Airbnb in a flat in Prague that’s part of a building which was built around 1900. The architecture is stunning, and Veronika, the owner, is refurbishing the floors (the kitchen is already done!).

When I returned from dinner tonight, I asked Veronika about the change I received at the restaurant. I paid in Euro, but received change in Crown, the Czech currency. She explained how much it was worth, and an approximate conversion rate for the rest of my time here. After explaining, she asked where I ate and I couldn’t remember, so I went to look at the receipt. When I returned to the kitchen, I said, “I ate at UTENKA” (<— NOT the Czech spelling; needs a few special characters), and she responded,
“That means receipt.” Oops.
So I learned a new word today!

After laughing a little bit, she said her apartment was too warm (it was a bit so), and asked if I wanted to have a beer with her at the park. I agreed and we walked across the street to the stairs which are the park entrance from this side.

Someone had blocked the stairs off with barriers, much like the metal ones you see at festivals, etc. We walked by them, anyway, and I now understand another reason why her apartment location is so good. The pictures cannot even capture what I saw, but here goes: 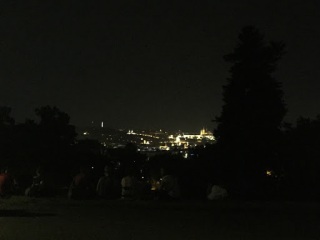 Prague. At night. This park looks out over the Old City, across the valley toward the river. I have never seen anything like it. We ordered two beers from the nearby beer garden, snagged a spot on a bench, and talked for over an hour.

She’s an incredible host, and I would not have had this magical experience without her. People told me that Prague at night was beautiful – that’s not even half of the story for the view I had. It was like looking at Cinderella’s castle, or the inspiration for the Beast’s castle, all at once.
It’s almost impossible for me to put into words how I felt while sitting on a bench, with a newfound friend, having a drink, looking out over Prague at night. It was an experience I could not have planned, and I wouldn’t have changed a thing. Tomorrow is a big day, and I will be taking lots of video footage of the downtown area.
ALSO: THE BLOG HAS HIT 2000 VIEWS.
Thanks for checking in on my goofy, worldwide adventures. Cheers to many more posts, and many more views.