Work, Eat, Play, Repeat: An interview, a biergarten, and an organ concert

Today was a wonderful day. I started off by packing my lunch and going to the university to do some work at the library. After running back to the dormitory to familiarize myself with my equipment and double check everything, it was time to catch the bus. I had an interview scheduled with a woman named Lena at 4pm. We met at TaraCafe, a vegan/vegetarian/free trade coffee shop in the altstadt (old city), and ordered some of their fresh lemonade.

I know… it’s green. But is was tasty! That object in the corner is my GoPro, and it’s been great to work with since I’ve been here. I plan to use it to record all of my video footage and interviews between now and when I finish my dissertation, and this was my first interview for my dissertation project!
Lena was wonderful. We have a LOT in common, and I think I have found a kindred spirit here in Regensburg. After concluding the dissertation-focused interview, we talked about ourselves and I asked her about a good place to get schnitzel in altstadt. She offered to walk me most of the way there, since it was on her way home. It was called Kreuzschänke and was a little out of the way down a side street. The interior of the biergarten was filled with flowers and there wasn’t a free table in sight.

I sat on an empty bench, knowing that I was not in a hurry and could wait for a spot at a table to open up. I was also happy to just eat my dinner on the bench; I didn’t want to take up a table for 4 when there were other people waiting. There was a smaller table behind me with an older couple, and I asked them if I could use their menu. The waitress came by and I ordered a Kloster Dunkel beer, and tried to order their famous schnitzel. She explained that it would be difficult to eat on the bench, when the couple behind me started speaking to her. After a few seconds, they invited me to share their table, asking if I had another friend coming along later. When I explained that I didn’t, they told me they were more than happy to share their table with me. I ordered the schnitzel (they had already received theirs), and we started chatting about why I was in Regensbug, etc. My beer arrived and Josef, Ursula, and I shared a toast (“Prost”).
And then the schnitzel arrived. 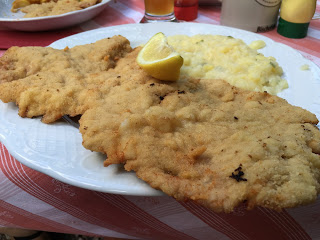 They have two sizes: large, and extra-large. I ordered the “smaller” of the two with kartoffelnsalat (German potato salad). It was VERY tasty: crispy, a splash of lemon, and exactly what I was looking for!
We spent about an hour sharing dinner. Josef works in Informatik, Ursuala for a publishing house. She just met T.C. Boyle last week! In a few ways, they reminded me of my own parents. Ursula had 2 brothers and a sister (just like my mom), and Josef had 5 sisters and a brother (the opposite of my dad). They talked about the importance of travel, and how “culturing” oneself is important. Each of them shared stories of their previous visits to the U.S., and we all agreed that New York City is a great place to visit but none of us would want to live there permanently.
They were absolutely lovely people, and I realized that I had found the “German version” of my parents – some would say by accident, but I believe that our experiences are not random. I had been feeling a bit out of sorts, with the internet fiasco and all, and thinking through what I will do with my future, education, dissertation, work goals, etc. But talking to Josef and Ursula brought me back down to earth much like what happens when I speak to my parents. They were even gracious enough to allow me to take their picture:

After we said our farewells, I walked quickly back across the altstadt to see if I would be allowed into the organ concert at the Dom. It’s a special series for the summer, and they bring in a different organist every week. The organ in this cathedral is the largest hanging organ in Europe – not to be missed. I was quite happy to find out that I was not late, the concert started at 8pm and I had arrived at 7:45pm.
There are no words to describe this cathedral, and my pictures were not able to do it justice in any way, but here they are: 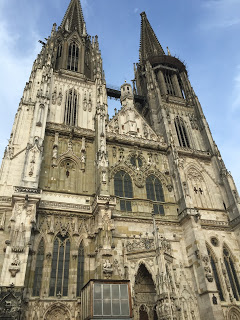 Most of the stained glass was at the top of the cathedral, near the dome ceilings

The largest hanging organ in Europe

The prayer area next to where I was sitting

When I arrived, there seemed to be no seats that were facing the organ, so I planned to stand behind the pews that were. Fortunately, there was a concrete “ledge” behind them with a man already sitting on one side. I walked over to take the seat on the other side, and he told me to wait. He got up, took one of the long cushions from the prayer area, and laid it on the concrete to we wouldn’t have to sit in the dirt. Essentially, I watched an organ concert that included Mendelssohn and Bach, from a corner in the church that seemed to be cut out just for me.

After the concert, I caught the bus back to my dormitory at dusk. Overall, it was a wonderful day – the type of day I was hoping to have in Europe. I owe a special thanks to my parents for the support they have given me as I prepared for this trip and since I’ve been here. And I also want to thank Ursula and Josef, for giving me a seat at their table and sharing their kind words and stories with me. This trip would not be the same without them.

Now that I am finding ways to settle in Regensburg, I am going to Prague tomorrow! I’m sure more adventures await me there!