Let’s Chat about the Food – What I Ordered

And by that I mean here are a LOT of pictures of the food I’ve ordered, made, and eaten during my time in Germany. There is SO MUCH DELICIOUSNESS to go around – it’s one of the reasons I love being here.

First meal in Berlin was at Ferdinand 34 in my new neighborhood (the website is only in German). Of course, I ordered schnitzel and käsespätzel (German macaroni and cheese).

A drink picture, but important. There’s a covered area in the neighborhood with a getränkenkarte (drink cart) serving coffee, tea, wine, and beer. It may be winter here, but Germans just keep their coats on and sit outside anyway!

Special shout-out to Wisconsin native, Katie and this DELICIOUS cookie shop. She bakes all of her cookies from scratch, and makes ice cream sandwiches in the summer. Of course, she’s in a prime location across the street from a park, so stop in, grab a cookie, and take a stroll! 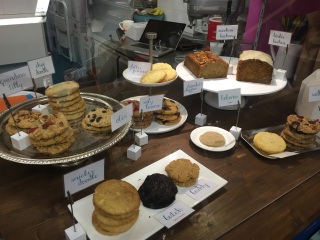 Just a few of the cookies Katie offers. For detailed descriptions, check out her website. I was a fan of “Glitter Princess” and “Mr. Lemohn.”

Did I mention she also makes AMAZING coffee? The shop itself is a kitchenware store, but it’s right next to a tram stop, so you can easily find it. 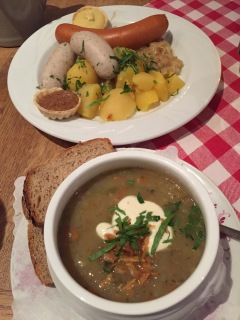 Have you ever wondered what would happen if I bar turned into a stock market? Berliner Republik has you covered. The food was tasty, and it was super busy. I was not as impressed with it as other places, but it’s in Mitte for those of you staying near the city center.

Take a moment and look at this incredible schnitzel, potato, and Brussels sprout plate. If you’re looking for an adventure outside of the city center, take the S-25 to Lichterfelde Ost, walk down the stairs, turn right to leave the station, and immediately to your right is a neighborhood gem. I don’t know the same, and the sign on the outside makes you think the place will be huge. It’s not. A few tables and lots of locals make this a unique getaway from the tourism of Mitte. The menu is in German, handwritten on paper, and only has 8 items.
Did I mention I could hear the cook pounding out the pork for my schnitzel? Tasty and fresh, I absolutely loved the food and beer in this tiny neighborhood pub. 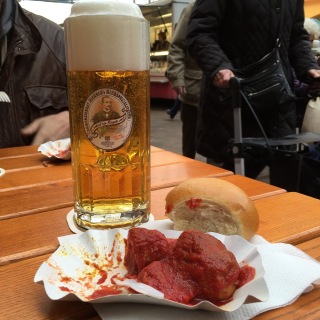 Market day rolled around again (on Wednesday) in the neighborhood, so I visited the local currywurst cart. I was not disappointed. The beer is from the getränkenkarte, which has the most places to sit.

I found this restaurant tucked away in a 3-building complex while doing in-person organization visits. It’s called Wilhelmina Speciale, and has been open less than a year. I ordered the mussels and frites – delicious! There’s also an outdoor area with trees over 40 years old. Sitting there in the summer (according to the bartender), you almost forget you’re in the middle of the city because there’s no street noise.

Saturday’s market day in the neighborhood brought out even more vendors, including a food cart I hadn’t seen before. I have no idea what this is, except one of the best sandwiches I’ve ever eaten. Brotchen, meat patty in the middle, peppers, and lettuce… And those bright red chilies were HOT.

After returning from Athens, it was time to check out the restaurant on the next block that had been closed since I arrived. They bring you a tiny beer as soon as you sit down, to quench your thirst while you decide to eat.

There was a list of specials in the front of the menu, so I ordered the lamb dish. Everyone’s food around me looked fantastic, and I wish I could have eaten there more often this trip. It’s more expensive than the other restaurants I have tried during this trip, but the food was top notch.

And here were are at Markthalle Neun, also known as street food heaven on Thursdays at 5pm.
Go here. Order everything. Eat it all.
It’s in East Berlin, so the neighborhood has a gritty aesthetic, and there are also lots of wine and beer stands around so you don’t go thirsty while eating your way around the world.
The options included: Nigerian, Egyptian, Vietnamese, Taiwanese, Austrian, and LOTS of Vegan options. I have never seen so many tasty Vegan food in one place – they even had a Vegan doughnut shopette!

I went with Austrian food (predictable, I know) because I have not eaten enough sauerkraut on this trip.
My other two food posts are about food I have made, and all of the awesome food cases I have seen on display throughout the trip.