Fridays in Senegal are Mosque Day. I did not realize this until I left my flat and almost every woman in the neighborhood and on my walk to WARC was wearing traditional dresses in one of several fashions. Sooo… it’s more like “Formal Fridays.” I know this because I asked my translator when I met him this morning.

Some other items of note:
— I went to the market area with the students on the UMKC study abroad trip. We rode in one of the multi-colored buses that are normally used for public transport. I think the market was overwhelming for them because they were not used to sellers being so forward with them.

There were approximately 14 of use in the group walking around the market, so we definitely stuck out. We were surrounded with different sellers from the moment we arrived. The men and women will call you “brother” or “sister” as they try to get your attention and sell you something. There is also no “personal space” because many of the sellers will touch your arm or take your hand to lead you into their shops.

Though I don’t have pictures of this experience, I will definitely get pictures the next time I go to the market. We were on a time crunch on Tuesday, so I just tried to make sure I stuck with the group. As always, it’s important to mind your personal belongings when in such a crowded and chaotic place.

— The power went out in the building the day before yesterday. I mean, OUT. I was working on my French lesson, and the internet stopped working. After a few minutes, I went to check on the router. It was off. So I flipped the light switch next to it – nothing. Oh well.

It came back on by the time we returned from dinner, so it wasn’t much of a problem. I just had to make sure I knew where the wireless chargers were in case we had to charge the smaller electronics. Phew.

— We went to a lovely Lebanese restaurant with Larson and Brenda on Wednesday night. First, we met them at their hotel which was close to the ocean. On the ride over, the taxi driver took the highway next to the ocean and there were some wonderful sights along the way.

Do I look ready for a ride across the city? I wore a scarf wrapped around my shoulders because my dress did not have sleeves.

We passed a marina, and there were boats that had already come in from the day’s fishing. 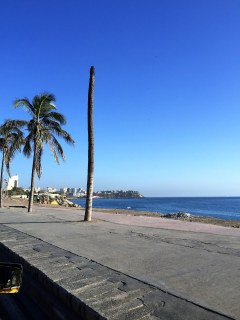 A view of the the city I hadn’t seen yet. So lovely! I also noticed there aren’t many beaches on this side of Dakar.
Once we arrived downtown, we went upstairs to enjoy the view with everyone before heading off to dinner. 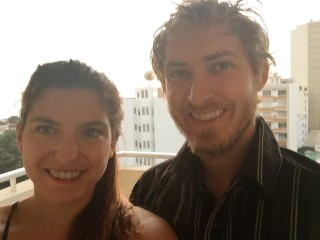 Greg and I were pretty happy to be above the city.

The view from their hotel balcony was fantastic! A lovely view of the water and the city sprawling along the sea wall.

The sunset signaled that it was almost time to leave for dinner. 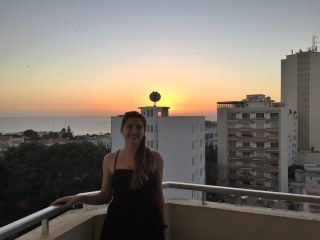 But I got one last photo in!

The atmosphere of the restaurant was lovely, and the food was delicious. Everything was quite relaxed.

The inside was lit with so many different strands of what seemed to be Christmas lights, and it was quiet because we ate dinner earlier than most people here do. From what I can tell, lunch is from 1pm-3pm and dinner is around 8pm.
We ordered a “Mezze Lebanaise,” which was a sampling of many different items on the menu. 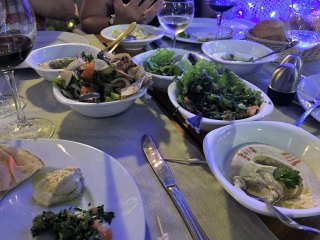 The appetizer course! Bottom right: hummus – absolutely delicious! Just above that: tabbouleh – my favorite salad. Above that: a grape leaf dish – I’ve eaten this before and was excited that it was on the menu. To the left of the small bowl: red tomato and green cucumber salad + pita chips. Bowl above the red + green salad: Babbaganoush – this was the first time I tried it, and I really liked it! The last bowl on the right toward the top of the table is a yogurt dipping sauce.

The second course, or… the pastries with meat that I cannot name. There were fantastic and we took the extras home for leftovers.
Also… We thought this was the last course. It wasn’t. We received a main meat course after this, and I was so surprised I forgot to take a photo. We received a rice dish, a chicken skewer, and another beef skewer, and also took the leftovers home. 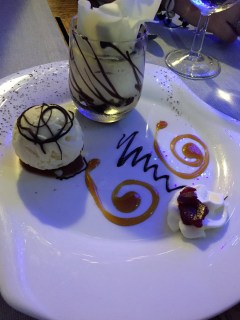 Even though we had eaten SO MUCH food, we decided to order tiramisu for the 4 of us for dessert. It’s one of the best desserts I’ve ever eaten.

Other things have happened throughout the week that I have not included in this post, but I promise to write tomorrow after I return from my adventure at HLM (Achelleme) Fabric Market.

← Welcome to Dakar!
A Video for Friday: A few thoughts on Dakar →